Powder Alert! Snowfall in the short and long term forecast! 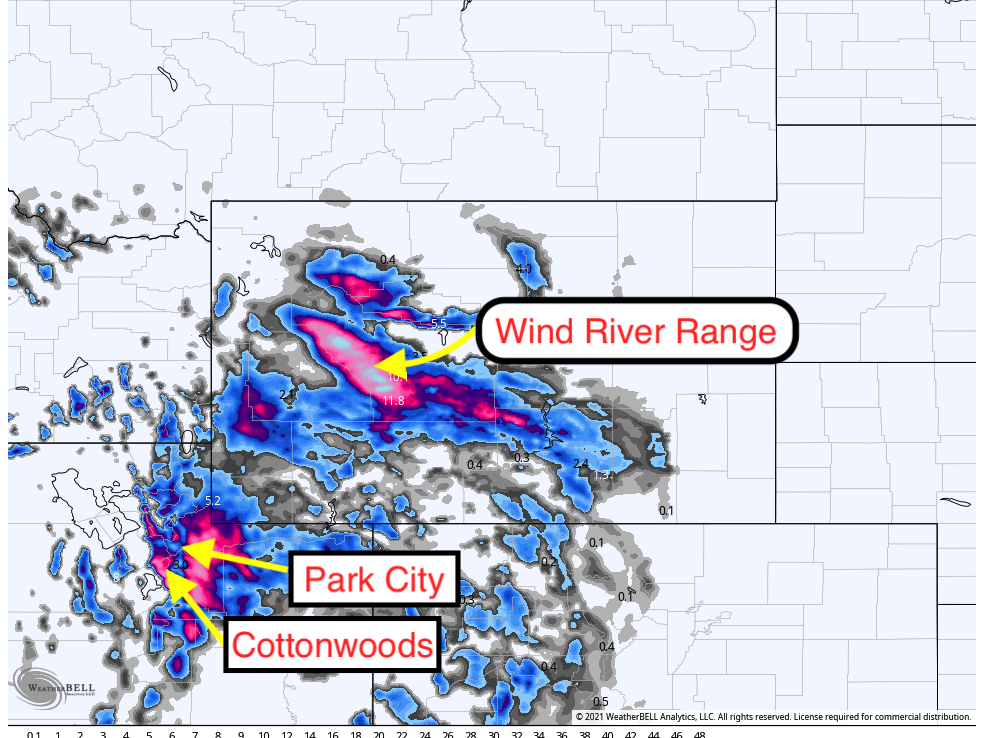 Snow has departed the Sierra and is headed for Utah, Wyoming and parts or Colorado. Some areas may see an excess of 12 inches. Next week looks deep! Keep reading!

Hopefully you all had a safe summer so you can start enjoying some powder again!  I'm rusty after not posting since last winter, but do have some good news to share. The Sierra saw a nice blast of snowfall in the past 24 hours. It appears that 4-8 inches fell favoring the northern Tahoe basin with 12 inches being reported at Sugar Bowl! This produced chain laws in many areas of Interstate 80 Sunday night. A closure was reported on 395 in Mono County near Mammoth. Did anyone have their snow tires on?

Below: WOO HOO- a foot of powder officially being reported at Sugar Bowl

Below: Interstate 80 Monday morning near Kingvale west of Truckee. 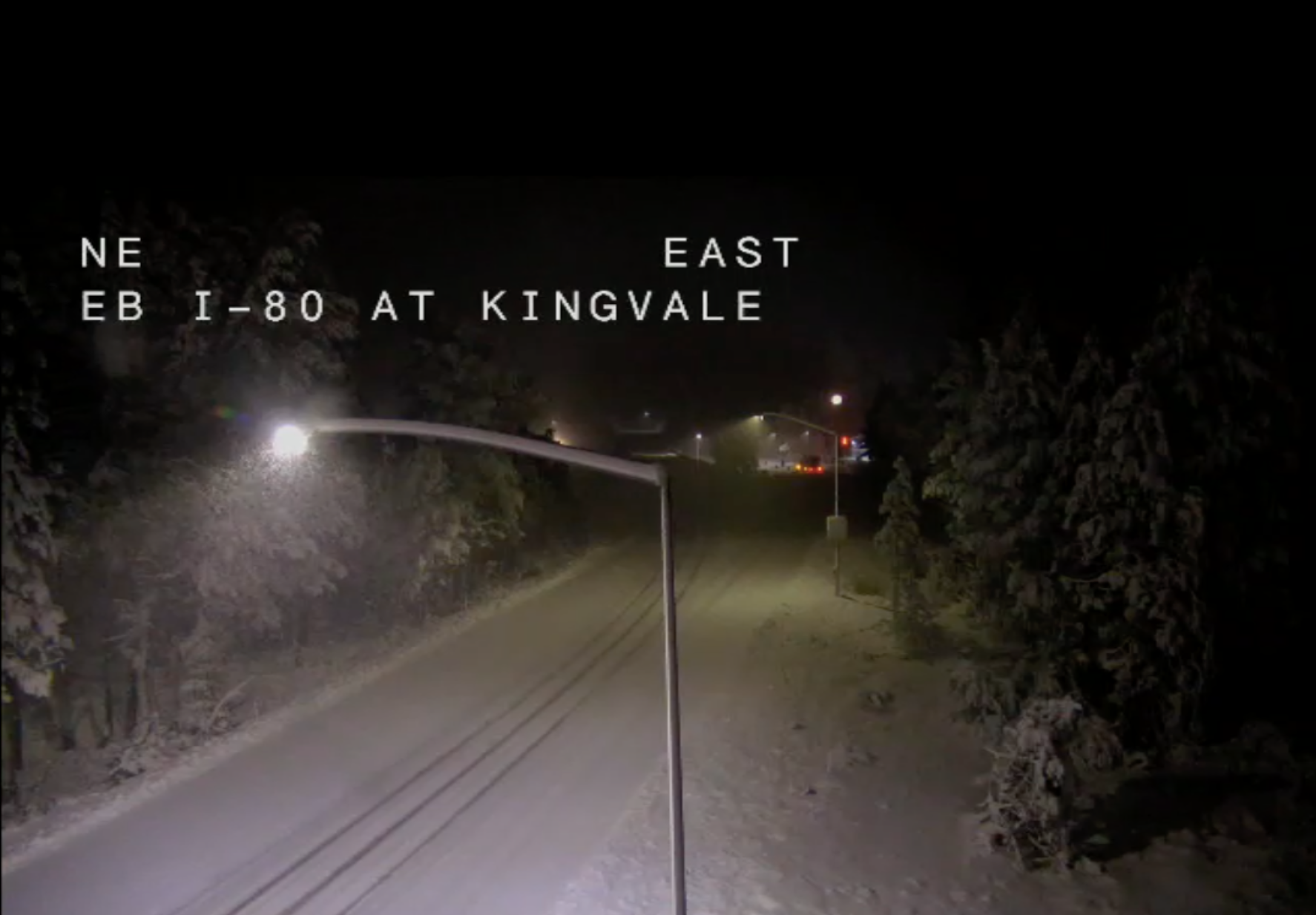 Heavy snow is now is now entering Utah with the models pumping out 9-14 inches for the Cottonwoods and perhaps 4-8 inches further north towards Powder or SnowBasin. Looking a bit closer at the short term high resolution models they depict some strong bands towards further east so its possible that the Wasatch Back that would include Park City and the Uinta Range also grab significant snowfall. Winds initially from the south will help Park City. Webcams show decent snowfall already underway in these areas. Winds will eventually shift to the NW Monday night favoring the Canyons side of PCMR, and most of the Cottonwood Canyons (LCC favored).  Bottom Line:  Overnight Powder- 12 inches plus for favored locations by NW flow (Little Cottonwood), and some sneak up surprises from the Uinta Range, or even Park City (Summits). 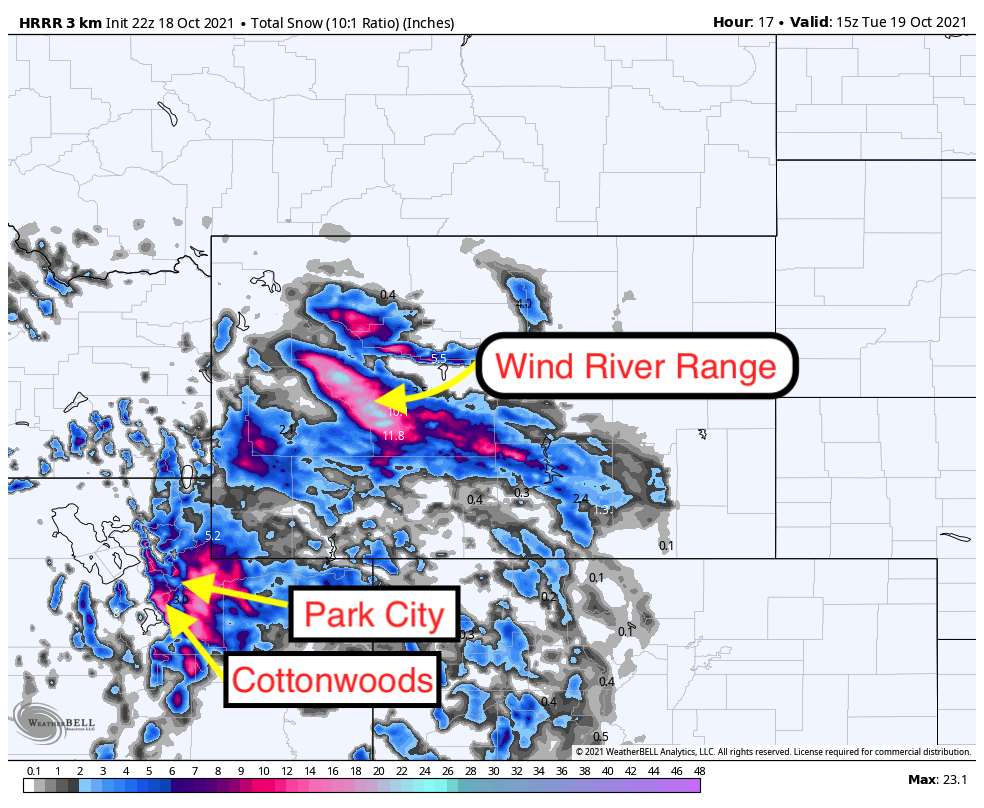 Central Wyoming will get pounded with 12-17 inches on the eastern side of the Wind River Range (South and east of Jackson). The ski areas will only see light snowfall further north or west (JHMR, Targhee).

In Colorado look for moderate snowfall near Steamboat and areas south or west. Most of the moisture favors the western slope and extends as far south as Telluride. The higher totals will likely occur near from Aspen (Elks) or north to Steamboat (Flat tops further west). Light snowfall will occur further east towards Vail and Summit County. Bottom Line: 3-7 inches towards Steamboat, Flat Tops further west, and similar amounts possible near Aspen. Lighter amounts as far south as Telluride or further east towards Summit County.

This is exciting!  A strong cold front and possible atmospheric river may set up over the west late this weekend or early next week. It is possible that several feet of snow fall over the Sierra that migrates over Wyoming, Utah and Colorado by Monday or Tuesday next week. Central Idaho and areas of the Pacific Northwest may also score some powder. The highest amounts currently on the models appear to focus on the Sierra and a wide range of the Rockies. Lowland snow is also possible with snow levels dipping below 6,000 feet.  This is going to make powder headlines if the models hold up. Look for my next post on this storm at some point mid or later this week.

Below: Strong low pressure early next week over much of the west! 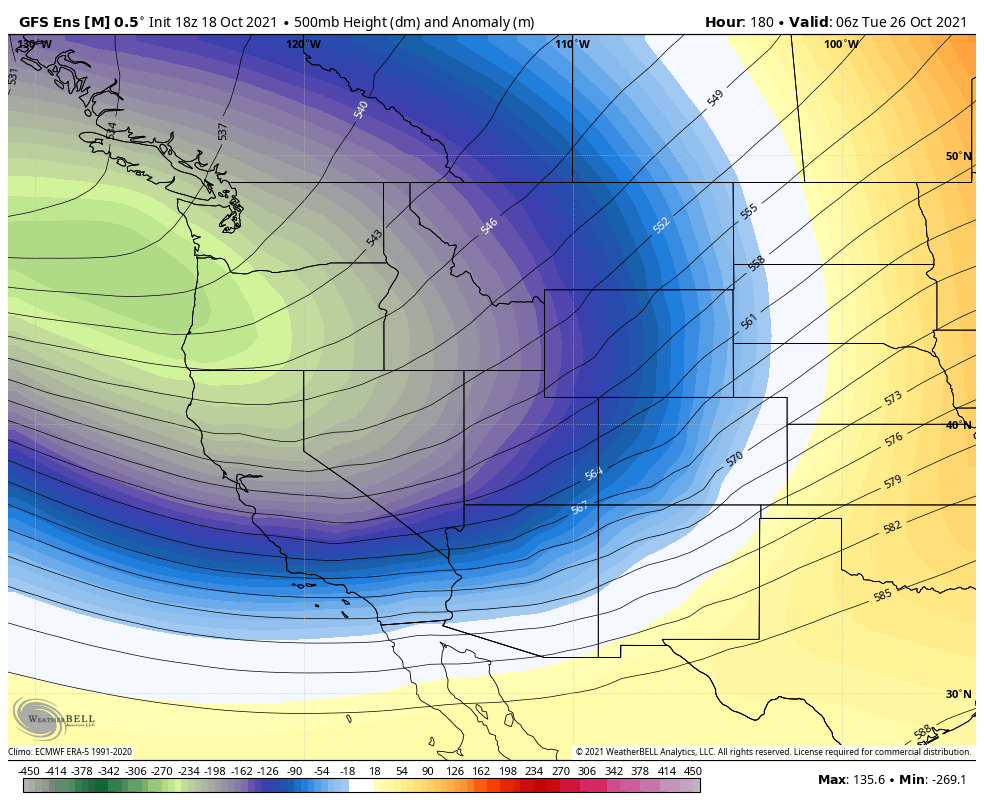 Enjoy the powder everyone! I am still healing a severe hamstring injury from last April but might try and do some skinning in the Wasatch on Wednesday. You can see my exciting travels, Wildlife Photos, and adventure from the summer on instagram @powderchasersteve.

Enjoy the powder and don't forget about low tide!  Don't ruin your season before it begins.

Powderchaser Steve
Forecaster
Powderchaser Steve has over 30 years of experience chasing storms based on his weather and local knowledge of resorts on both the East and West Coast. His snow intel will likely land him at the deepest resort and almost never missing 'First Chair' in the process. Follow 'The Chase' on OpenSnow to find out where the deepest snow may be falling.
Read More