Monday morning snow. Then back to warm and dry weather. 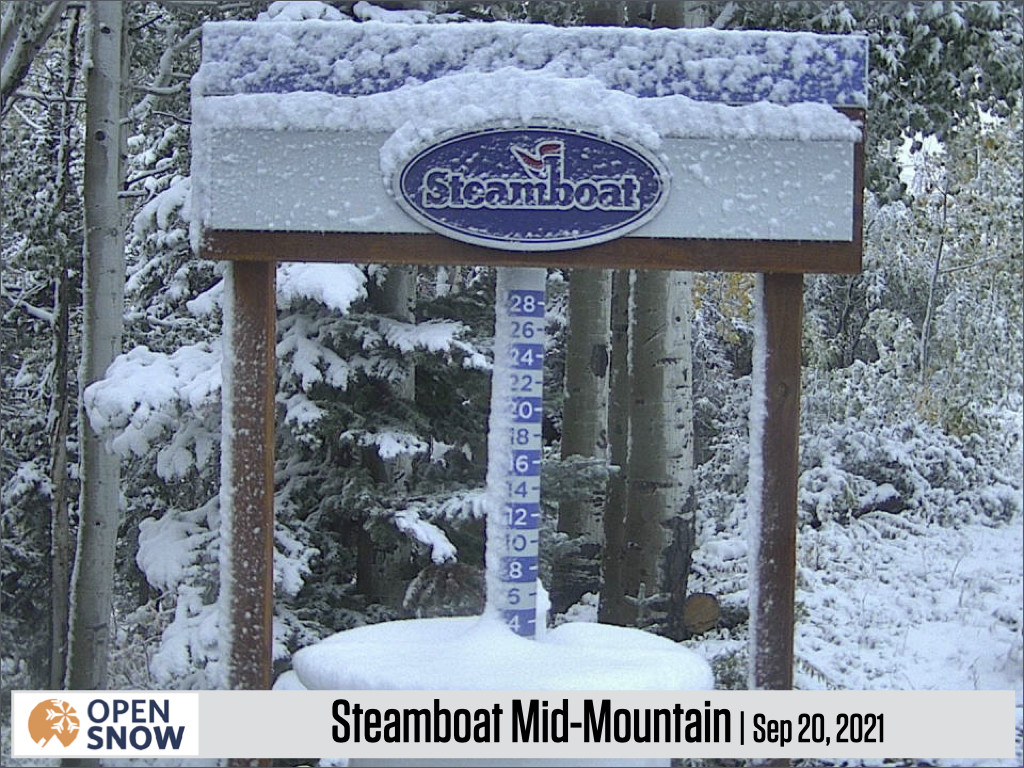 Snow accumulated on the far northern mountains on Sunday night with 3-4 inches on the upper half of Steamboat. This might be the last widespread snow that we experience in September, though, as I do not see any cold storms in the 10-day forecast. In terms of precipitation, look for mostly dry weather through about September 26th with a higher chance for (rain) showers after that time.

Sunday was dry during the day, then on Sunday night, a storm that tracked to the north of Colorado brought colder air and snow to our northern mountains.

The areas that picked up accumulating snow were generally north of I-70 and near about 10,000 feet, though accumulating snow dipped as low as 8,000-9,000 feet around Steamboat with snowflakes even mixing down to the valley floor around 6,700 feet at about 1 am on Monday morning. 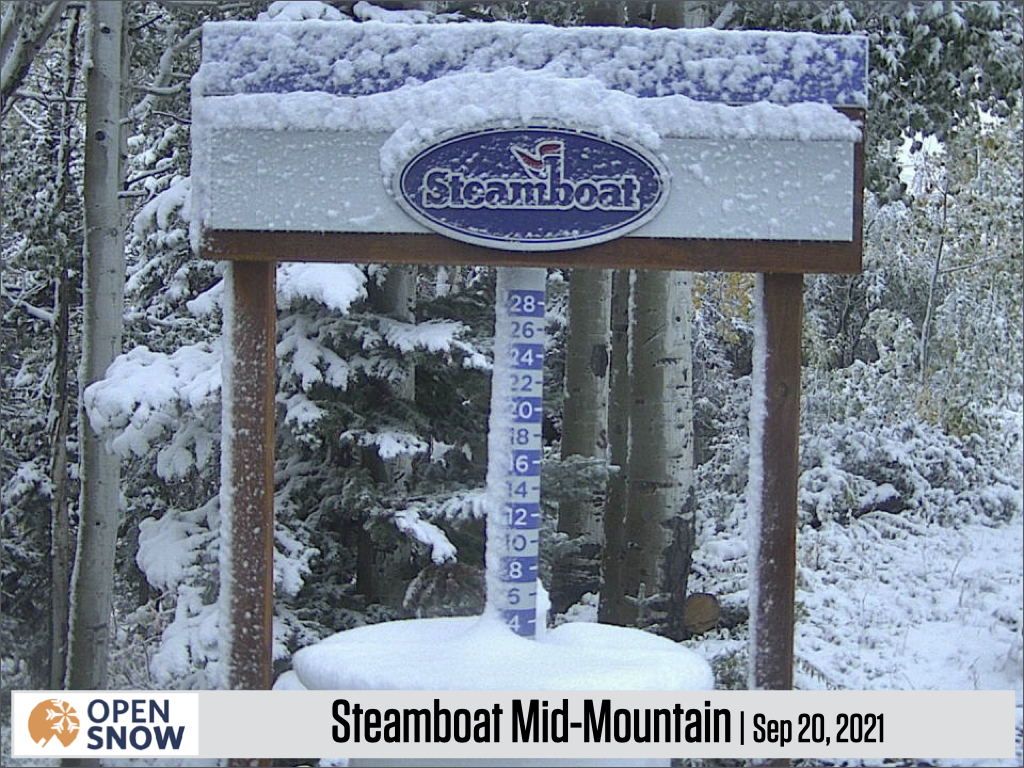 The snow line was just below mid-mountain at Steamboat. This cam facing west shows no significant accumulation in the town of Steamboat. 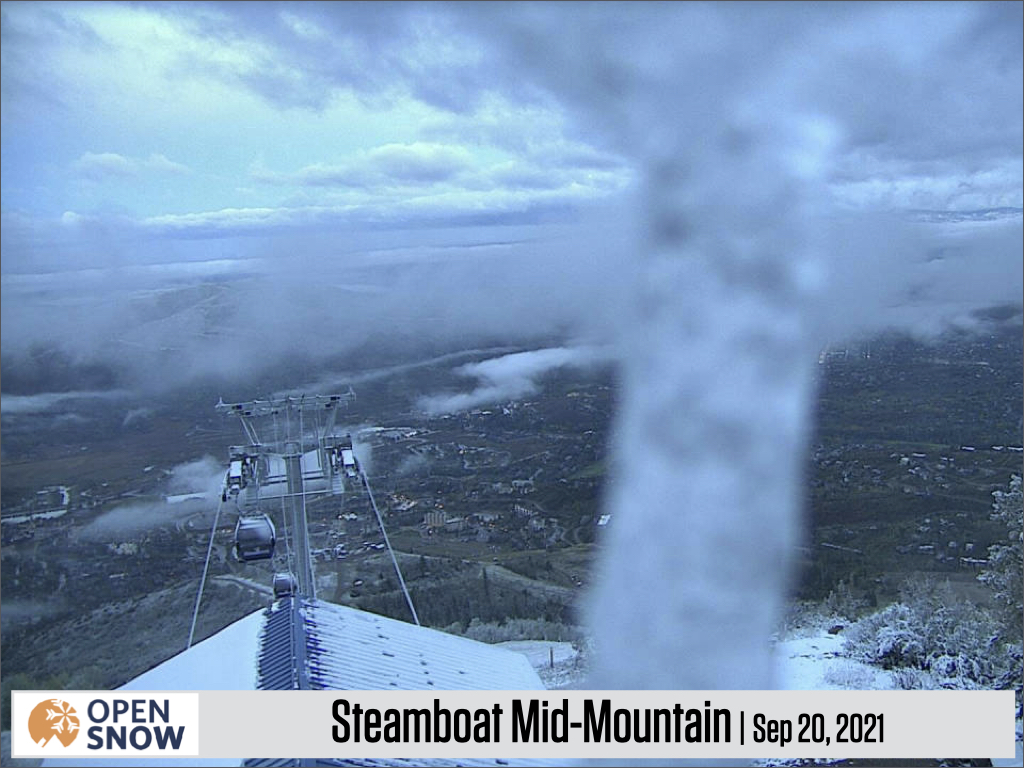 Another picture around Steamboat shows that east of the mountain, at Rabbit Ears Pass, there was accumulation on the grass though the road itself stayed mostly snow-free. 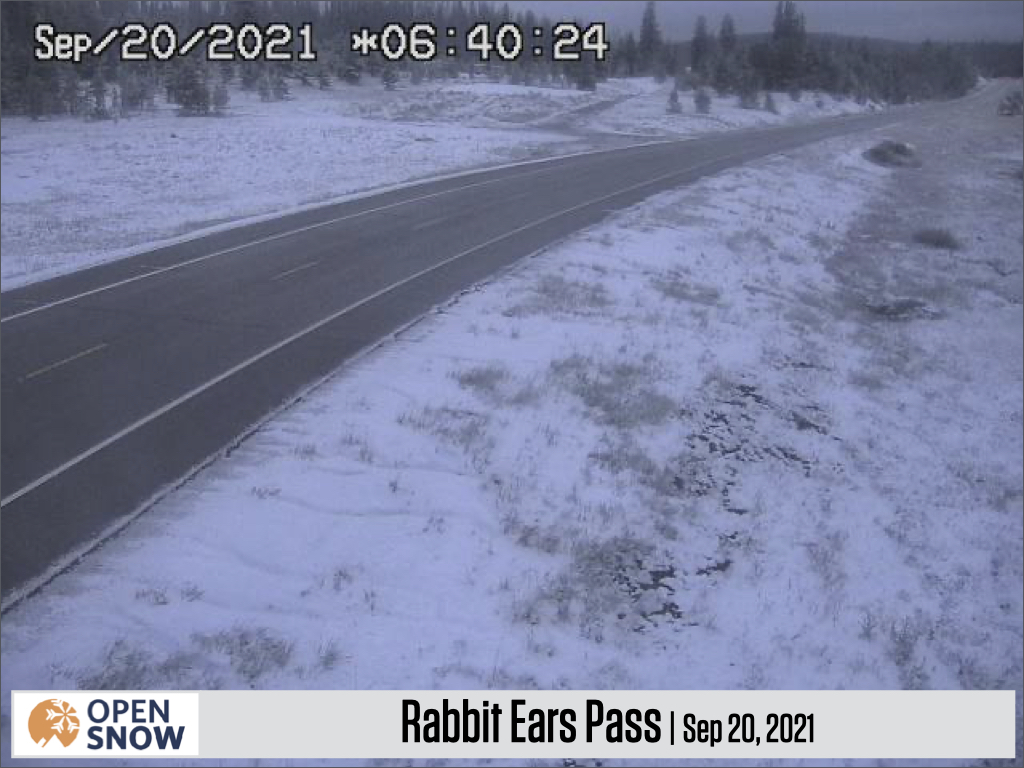 Farther to the east along the higher peaks closer to the Front Range, Cameron Pass picked up light accumulations. 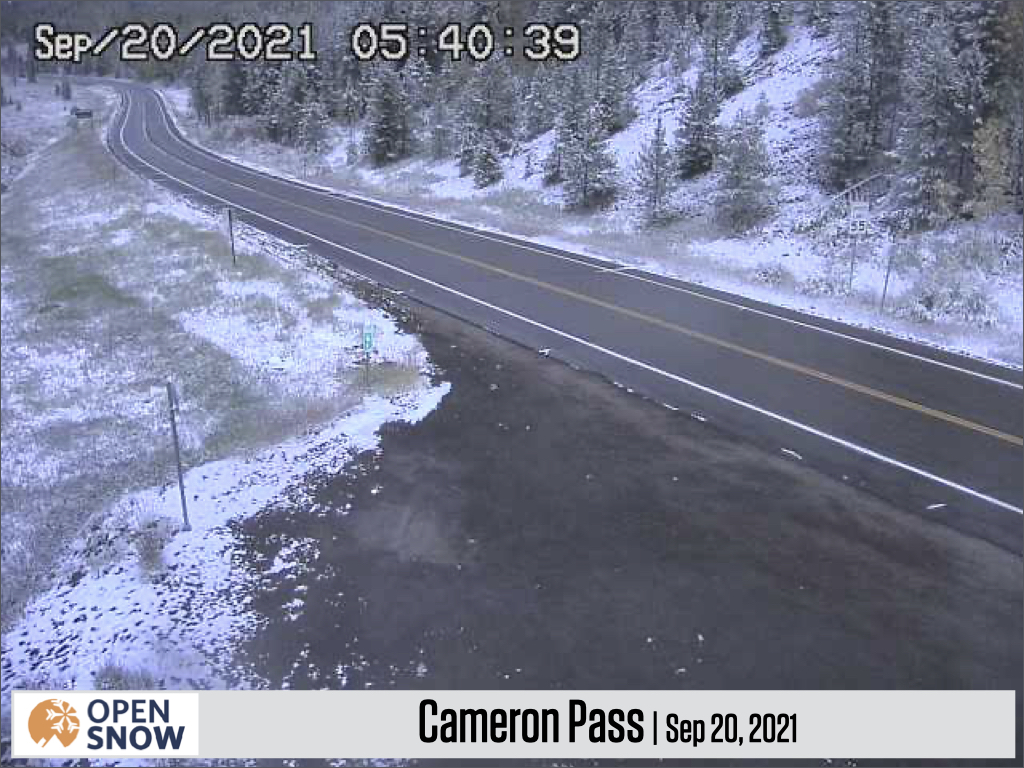 At the Alpine Visitor's Center in Rocky Mountain National Park, Monday's sunrise shows a beautiful winter scene with (maybe) a few inches of snow visible on the railing in the lower part of the photo. 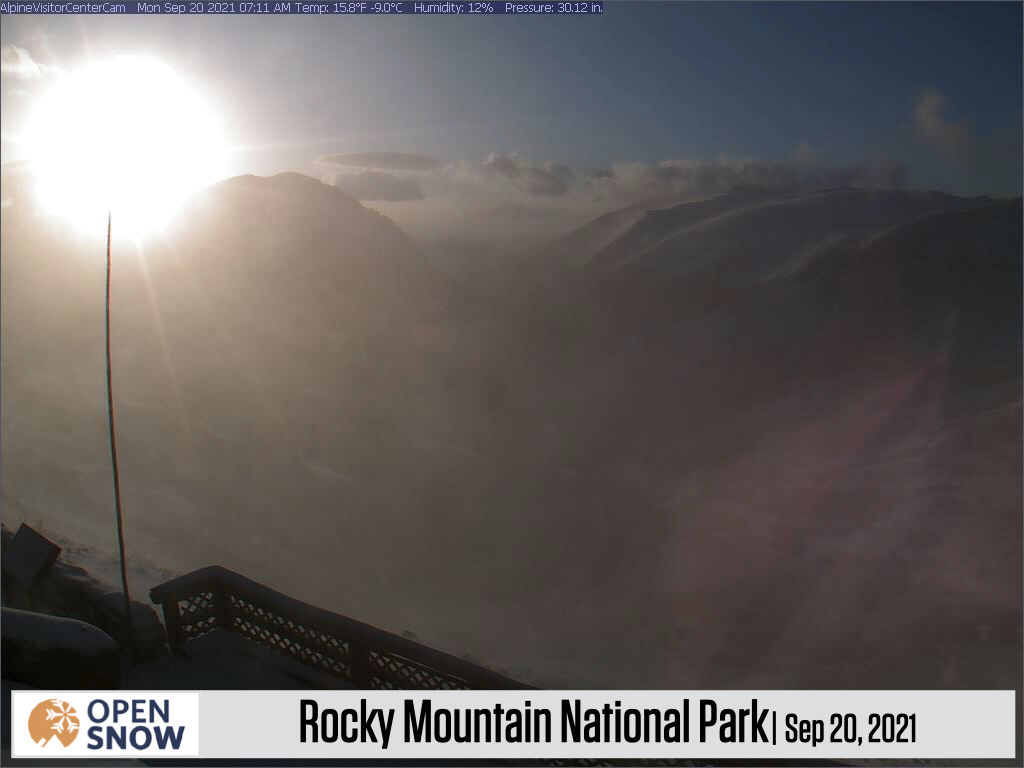 As for other ski areas, Winter Park was dusted with snow (see below), and a few flakes also accumulated at Arapahoe Basin and Loveland. 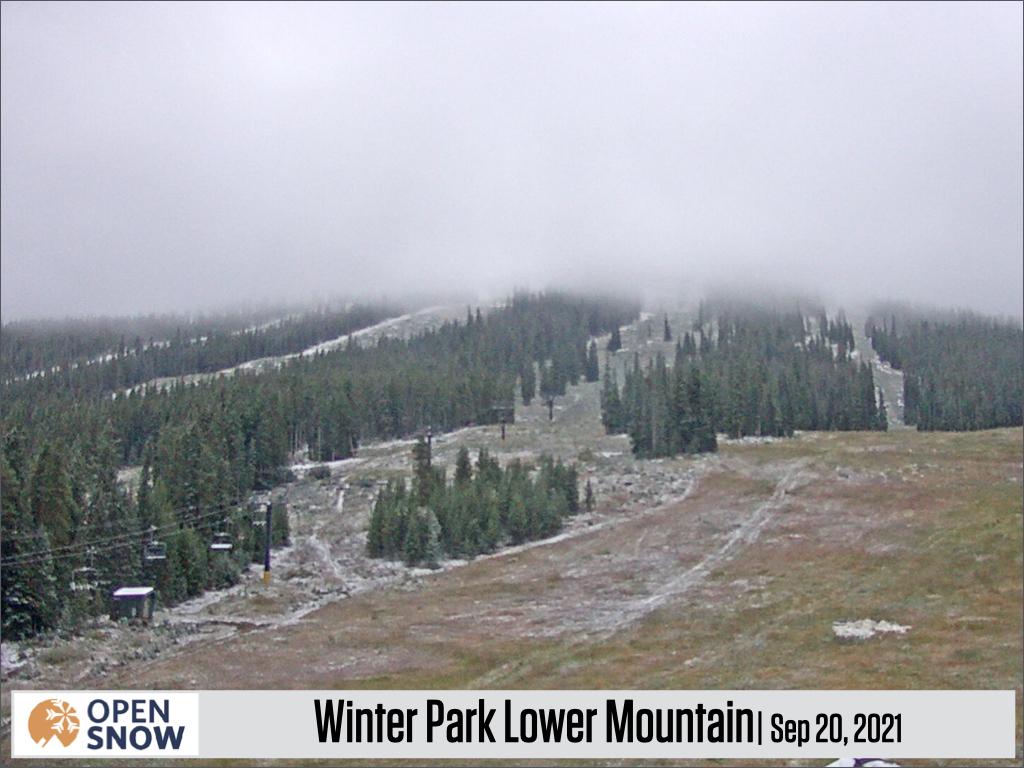 The storm that brought snow on Sunday night made its biggest impact to the north of Colorado. The map below, which shows the temperature compared to average, demonstrates that the coldest air is to our north with the main impacts in Colorado were over our northern mountains. 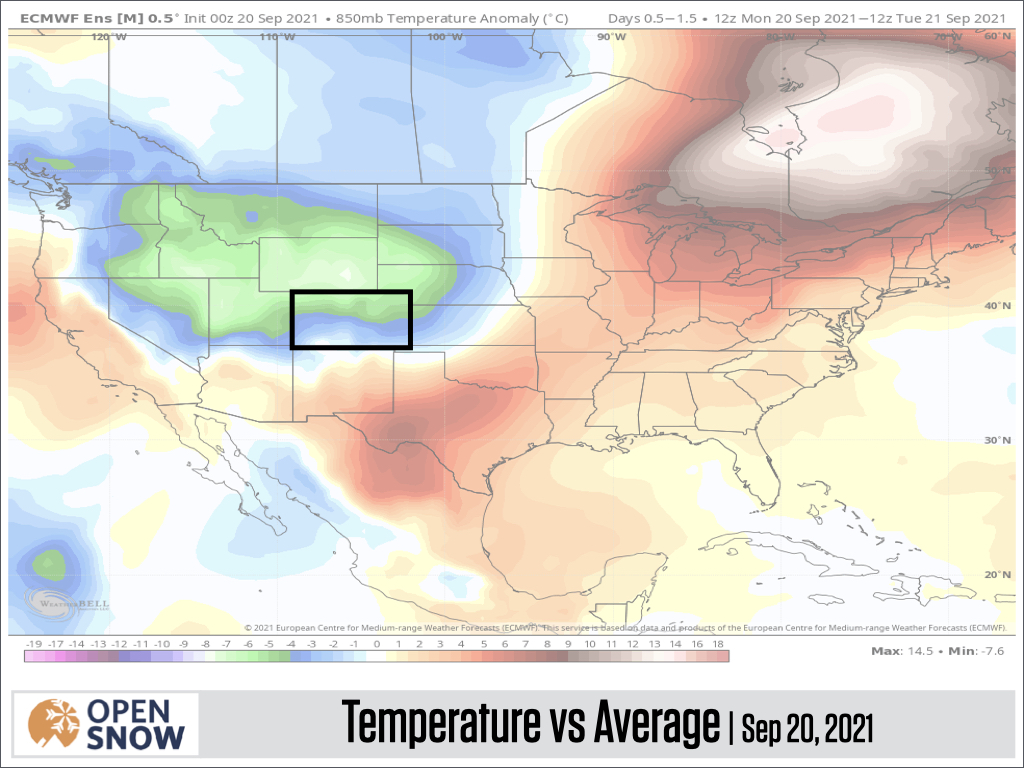 For this week, most of the stormy action is already behind us as it looks like we'll see mostly dry weather through Friday with cool temperatures on Monday into Tuesday and then readings warming after that. Right now, the only chance that I see for additional atmospheric action will be on Monday night and maybe Thursday night when a few showers could hit the higher peaks of the northern divide. 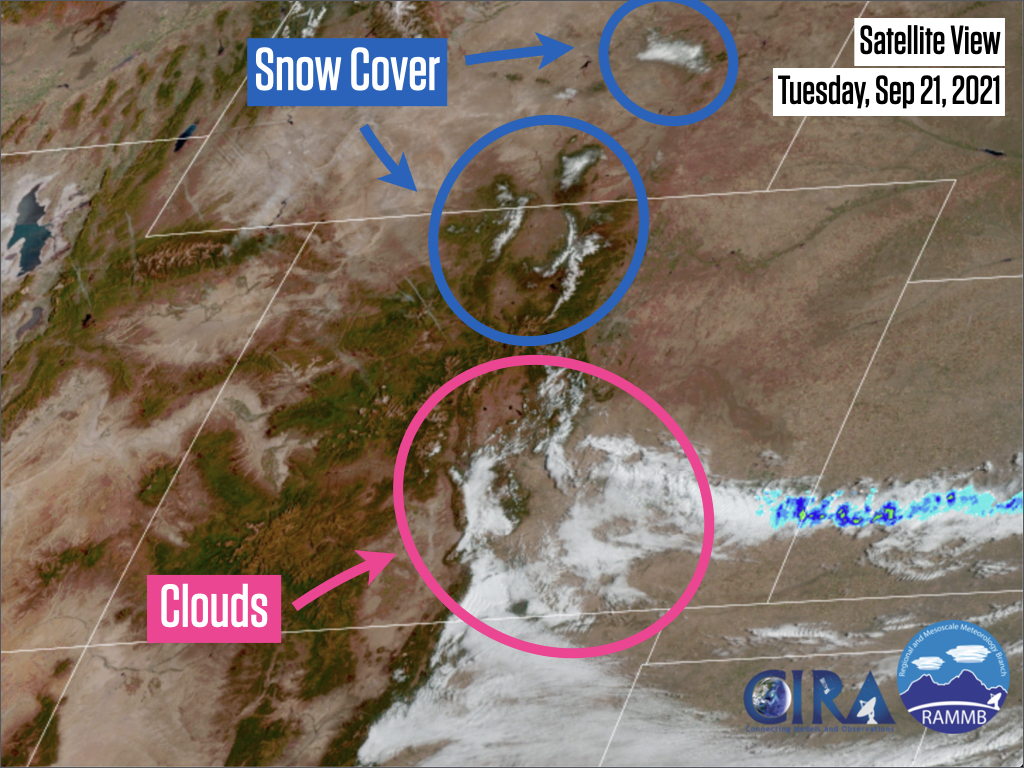 The amazing satellite imagery that I show above is available via this link and is a service of Colorado State University.

Looking ahead to the weekend of September 25-26 and the final few days of the month, the forecast trend is to keep above-average temperatures over Colorado. 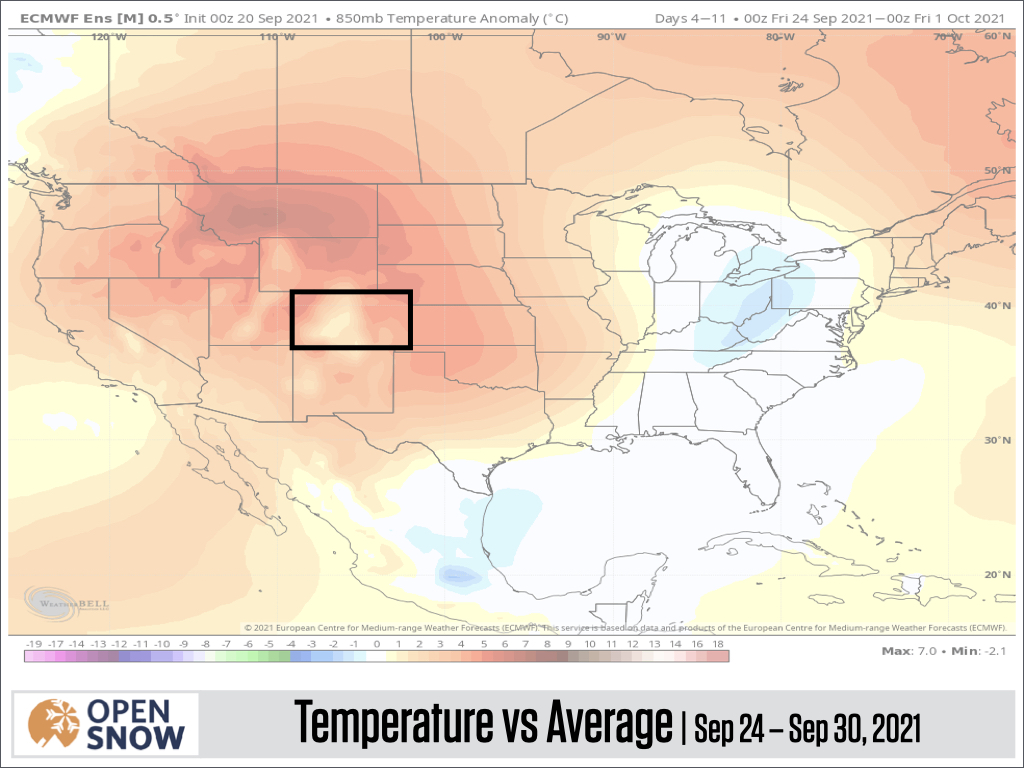 The weekend of September 25-26 should be dry, then it looks like showers will return to the forecast starting around Monday, September 27, with a chance for showers every day after that.

The reason for the showers during the final few days of September will be a storm that might park itself over the southwestern US and push rounds of moisture into Colorado. If this scenario is what happens, it's likely that most of the showers will fall in the form of rain and not snow since air temperatures will be on the warmer side thanks to the trajectory of the incoming air that will arrive from the southwest (rather than cooler temperatures moving in from the north).

To wrap things up, expect dry weather through about the 26th with a chance for rain showers each day starting around the 27th.

It's fun to have talked about snow and colder temperatures in this post, but there's no correlation between early-season snow in Colorado and snowfall during the rest of the season, so do not read anything good or bad into the fact that we saw snow in mid-September and will likely not see snow during the rest of the month.

I hope that you can get out to enjoy a few more beautiful hikes and mountain bike rides, and look for my next update later this week as I'll dig into the forecast for the last few days of September and into early October.