A weak storm crossing New England will produce a couple inches of snow across most of northern Vermont, New Hampshire, and Maine today (Wednesday). Warmer air floods New England tomorrow (Thanksgiving) with snow changing to rain expected across the entire region at almost all elevations. Temperatures remain warm through the weekend with more rain expected early next week.

Whether you're lapping steeps or slaying powder, Powder7 Ski Shop has the gear for your best days. And you can shop all of their Black Friday deals now from the comfort of your pajamas—no waiting, no lines, no mayhem. Save big on your next touring setup, layer up for winter weather, or shop North America's largest selection of used demo skis from brands like Black Crows, Blizzard, and DPS. Get early access to Black Friday at Powder7.com 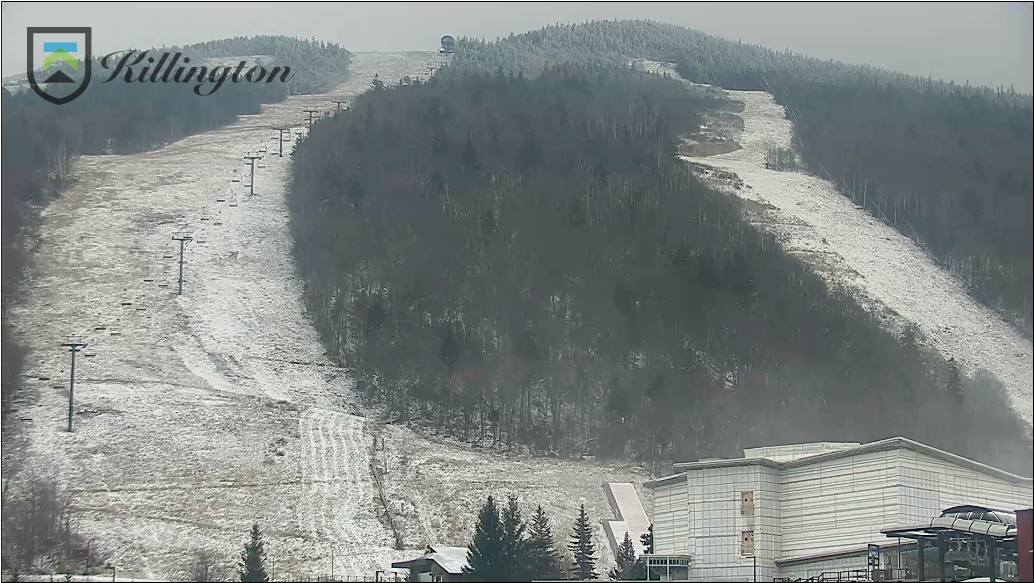 View of Killington (VT) this morning from their webcam. Natural snow falling slopeside with active snow-making seen (lower right). These trails could use *a lot* more snow, but won't likely be seeing anything significant in the coming days.

It sure looks more like winter this morning. Light snow started overnight and is continuing this morning across New England. Snowfall accumulation will be on the low end today with widespread <1" amounts across the northern halves of Vermont, New Hampshire, and Maine with localized mountain spots picking up 1-2" (e.g., Jay Peak in VT). Temperatures will also be on the rise today with slope-side and summit values increasing above freezing later this evening, bringing an end to a solid ~48-hour window of prolific snow-making across the region.

Snowfall forecast at resorts expecting to receive greater than or equal to 1" from our Powder Finder page.

The light snow this morning is related to the warm front of a larger storm over the Central U.S. and Great Lakes region that is headed our way on Wednesday. 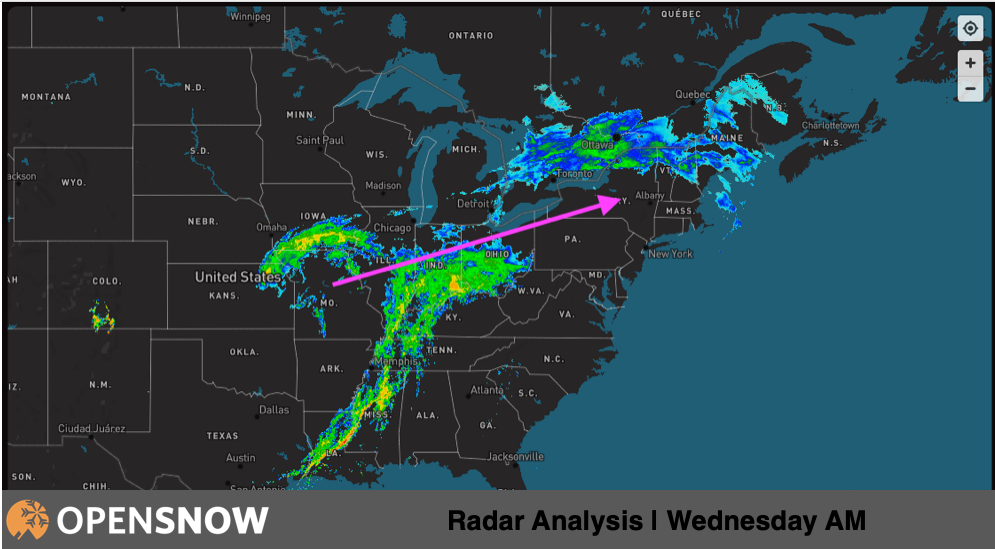 Radar analysis on Wednesday morning from the OpenSnow Maps.

The storm will arrive overnight Wednesday into Thursday bringing primarily light rain to the North Country with heaviest rainfall totals expected across southern and coastal New England. This storm shouldn't be a washout by any means, but it will likely melt any snow received on Wednesday. The dense man-made snow at most resorts should drain or absorb any light rain and withstand the ~24-hour period with above-freezing temperatures on Thursday. The highest elevations of the eastern White Mountains in New Hampshire and the western Longfellow Mountains in Maine are the only locations where models indicate temperatures may remain close enough to freezing for mixed precipitation throughout the day on Thursday with little-to-no snowfall accumulation expected.

Animation of precipitation and sea-level pressure from the ECMWF (European) Model for Wednesday night into Thursday night from http://www.pivotalweather.com.

As mentioned in the previous New England Daily Snow, we get a break in the storm track for the long weekend Friday, Saturday, and Sunday with only a chance of some light snow (although now more likely, rain) showers on Saturday night as northwest flow briefly increases the odds of some upslope flow across the mountains in northern Vermont and northern New Hampshire. Unfortunately, little-to-no snow accumulation is expected given the warmer-than-previously forecast temperatures. Temperatures during the days will be in the 40s with overnight lows near the freezing mark. Resorts will likely try to fire up their snow guns during the overnight periods, but action will likely be limited to elevations >2000 feet.

500-millibar (~17,000-feet) atmospheric flow and it's anomaly/departure from normal for Monday through Tuesday night from http://www.pivotalweather.com

We finally get a pattern change with a big trough of colder air expected over the eastern U.S. and you're not going to like the outcome. The trough looks like it will set up over the Ohio River valley and flood New England with warm air. The storm track - out of both the GFS (American) and ECMWF (European) weather models - with this trough of colder air will lead to storm development over the southeast U.S. that will track north into the Great Lakes region by early Tuesday morning (12/1). There are small differences between the GFS and ECMWF forecasts, but overall, there will likely be no escaping heavy rain out of this storm at most resorts across New England. The warm air will be punctuated by dewpoint temperatures (the temperature at which the air needs to cool to in order to produce condensation, or fog) increasing into the 50s region wide which will aid in warming the snowpack and lead to snow melt. The good (?) news here is that there really isn't much snow to melt. The bigger news story if this plays out will be river flooding with the ECMWF model consistently pumping out *rainfall* totals of 5-7 inches across the White Mountains.

Comparison of precipitation type and sea-level pressure forecast for 12/1 annotated from http://www.pivotalweather.com.

The atmospheric flow pattern remains amplified with a trough of cold air parked over the eastern U.S. and Great Lakes region. As long as this pattern remains over the U.S., it will increase odds of storms over the Northeast. The forecast challenge as we move forward will be whether these storms take an inside track (like Monday/Tuesday's storm with greater odds or rain) or take an outside track along the coast or offshore (greater odds of snow). At this point, its far too uncertain in the long-range forecast to make that determination. With that said, the storm track does favor another storm next weekend (4-7 December time frame) and we'll keep an eye on the details as we get closer.

The next forecast will be on Friday (11/27); Happy Thanksgiving!

Jason Cordeira
Meteorologist
Jay Cordeira is an all-around outdoor enthusiast living and working among the lakes and mountains in New England. When he’s not in the classroom teaching the next generation of meteorologists, you can find him on the trails, rivers, lakes, slabs, and backcountry of the White Mountains.
Read More