A Week of Precipitation... 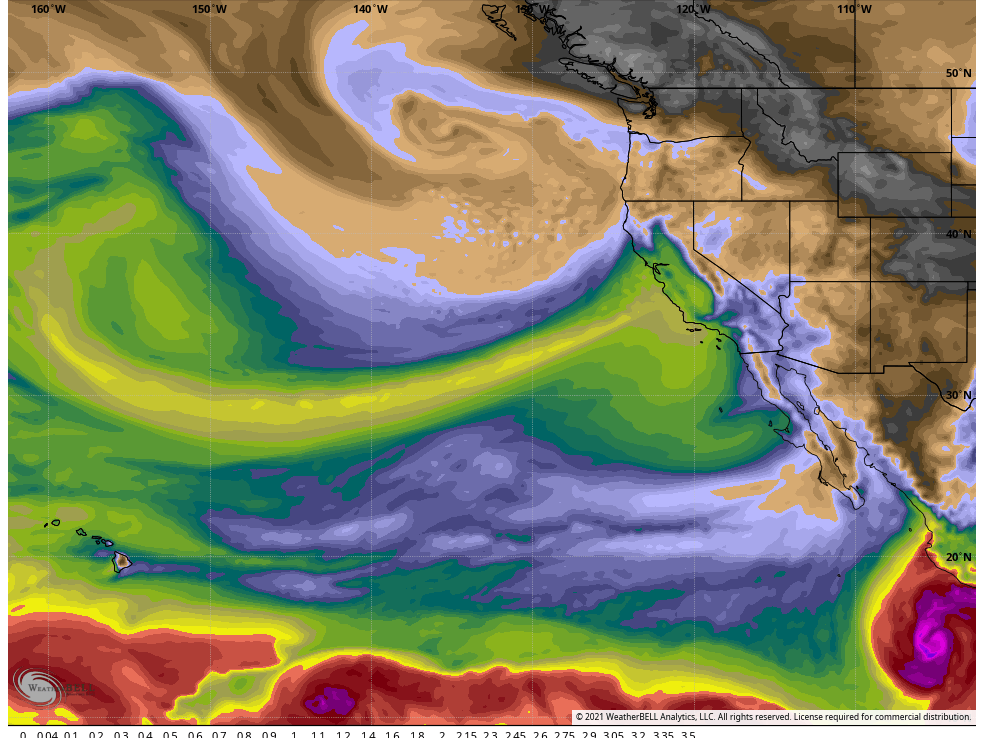 A complicated forecast ahead and what could be the wettest October since 2016. First, let's do a quick recap of the Sunday night storm.

We saw snow below lake level Sunday night into morning. We were expecting 4-8 inches along the crest, 2-4 inches on the east side of the lake, and 1-3 inches at lake level. From the reader reports and ski resort reports, it seems the forecast worked out for most locations. NW of the lake near Donner Summit we saw a few inches over the forecast range.

The highest reported total was a foot of snow at Sugar Bowl. 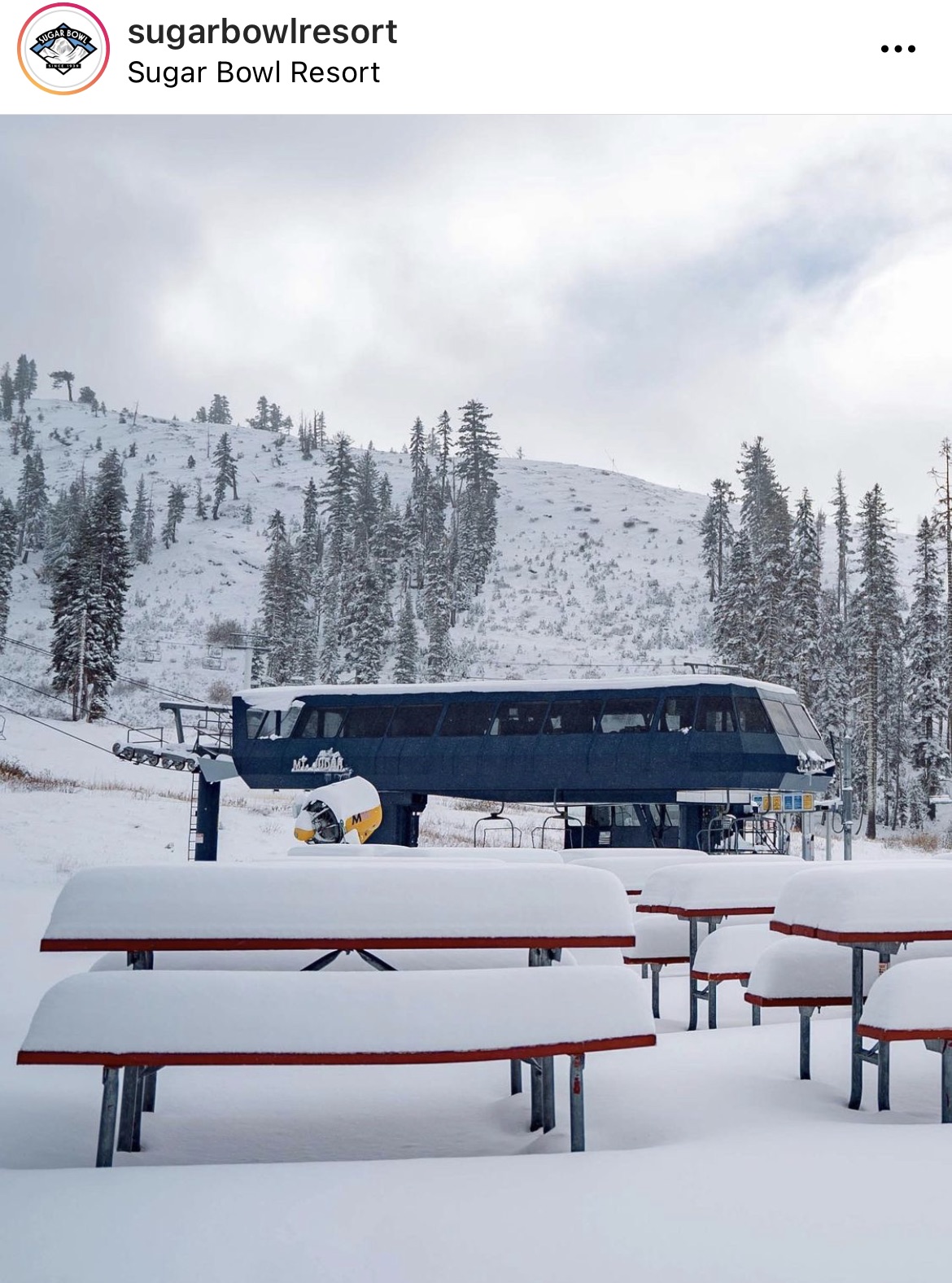 Not a bad October so far. 12 inches of snow has fallen at the Snow Lab which is 120% of average for the month, and more snow looks to be on the way.

We start with a fairly nice day Tuesday. Expecting mostly sunny skies with some clouds possible as the next system approaches.

Highs near 50 degrees at lake level and cooler as you go up in elevation. The winds start out light and shouldn't pick up a lot until Tuesday night.

We could see precipitation in some form every day from Wednesday through next Tuesday. A week of precipitation which we haven't said that in a while, especially in October.

The Wednesday system looks impressive on satellite but it will fall apart as it moves inland. We may only see light precipitation reach the Tahoe basin, with most of the showers confined to west of the lake along the crest. 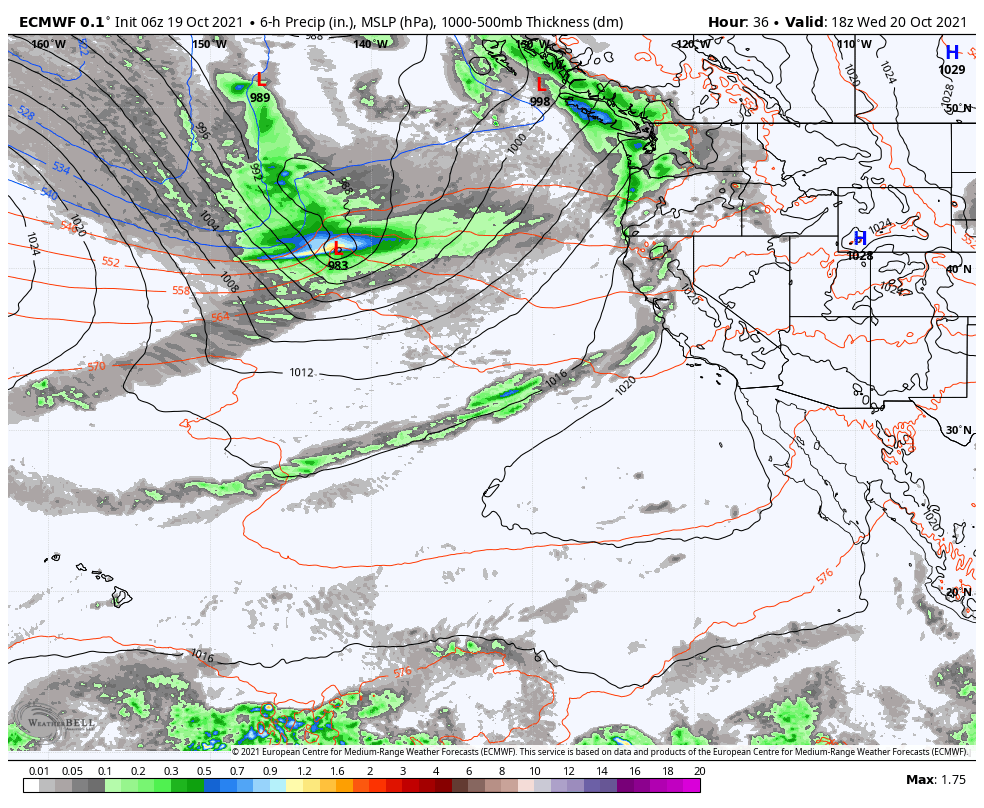 Snow levels may be up above 9000 ft. for most of the precipitation. So more of a nuisance system with gusty winds, highs in the 40s, and scattered rain showers. Ridgetop winds gusting from the southwest up to 90+ mph Wednesday morning and then slowly lowering through the day to 60+ mph by evening.

Here is a look at the meager amounts of total precipitation currently forecast to reach our area through Wednesday... 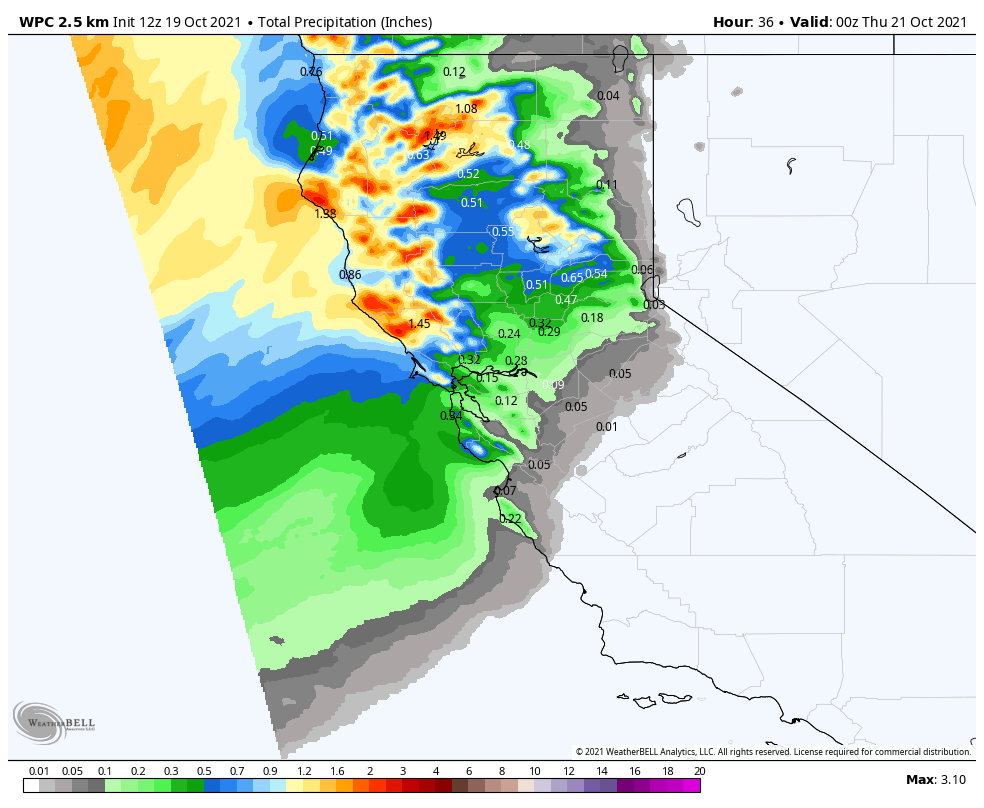 Thursday was forecast to be a break between systems, but now we could continue to see more showers. There is a lot of moisture over the Pacific and the westerly flow along with geographic lift from the mountains could continue showers. Snow levels however are looking like they could rise up above 10,000 ft. on Thursday.

So another day of chilly weather and scattered rain showers. Ridgetop winds are could gust from the southwest up to 50+ mph.

Another system moves through Friday. This one will be holding together and will have more moisture, but it looks to be aimed to our north. Tahoe could be right on the southern edge which will make the forecast trickier. 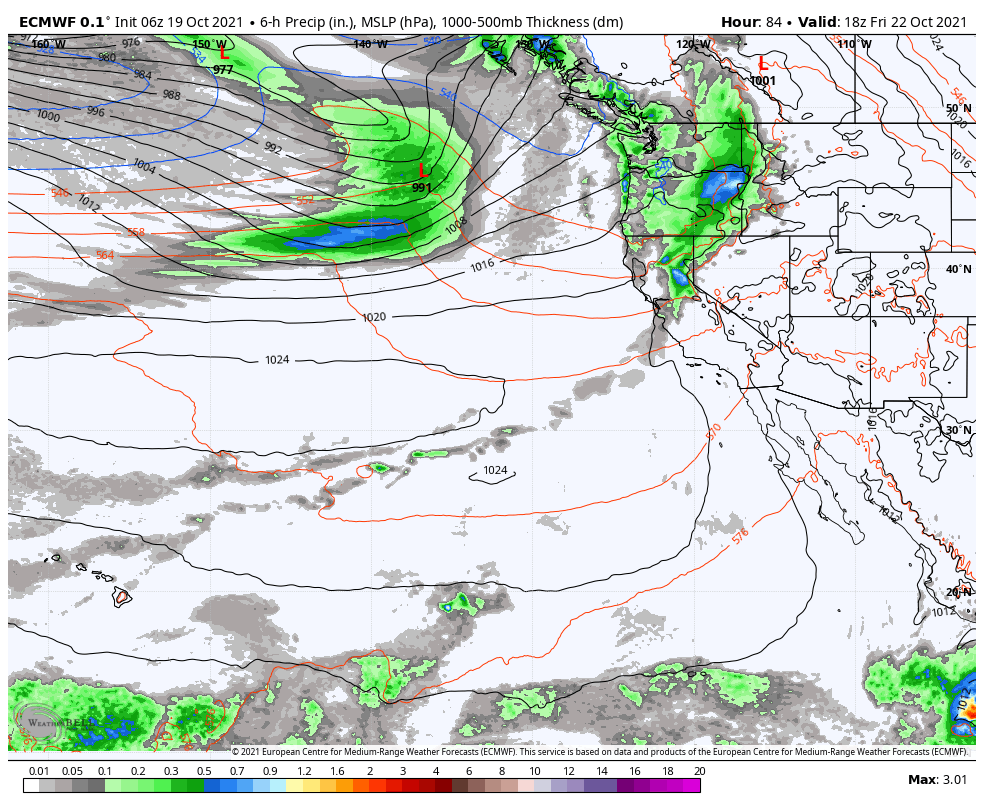 Even more tricky will be the snow levels combined with the placement of the precipitation. The GFS model shows 9000 ft. snow levels early Friday morning, but then falling to around 7000 ft. by evening. That means if the wetter scenarios happen we could see accumulating snow on the mountains.

Total precipitation amounts could be only up to a few tenths along the crest up to an inch. The best chance to see the higher end would be NW of the lake near Donner Summit, and then we could see as little as nothing farther south near Mammoth. 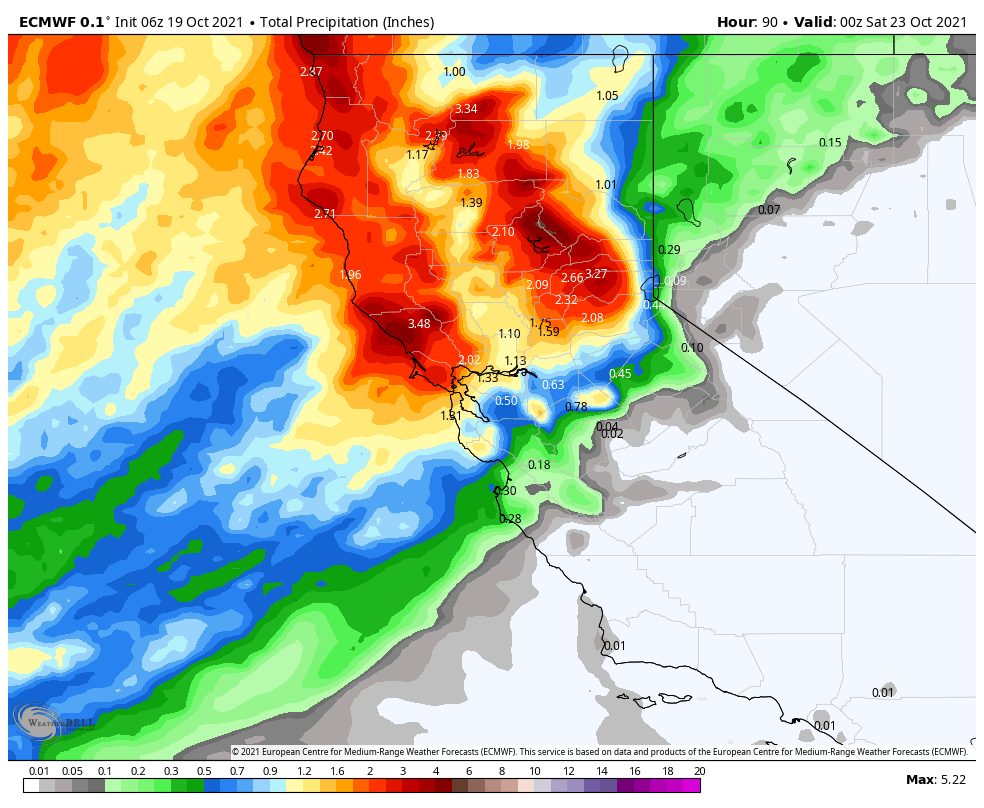 We will have to keep a close eye on this system for Friday afternoon into the evening. If we see some heavier precipitation push in, we could see several inches of snow above 8000 ft, and up to a few inches down to 7000 ft.

The winds pick up again on Friday with ridgetop gusts from the southwest up to 100+ mph during the day before coming down again Friday night. Gusts on the lake up to 30+ mph.

The next system approaches Saturday and could last until Tuesday. This will be a complicated storm to forecast with the possibility of big rain & snow totals if the wetter models are right. The ingredients will be there for a mid-winter-type storm for CA.

A deep trough over the West Coast... 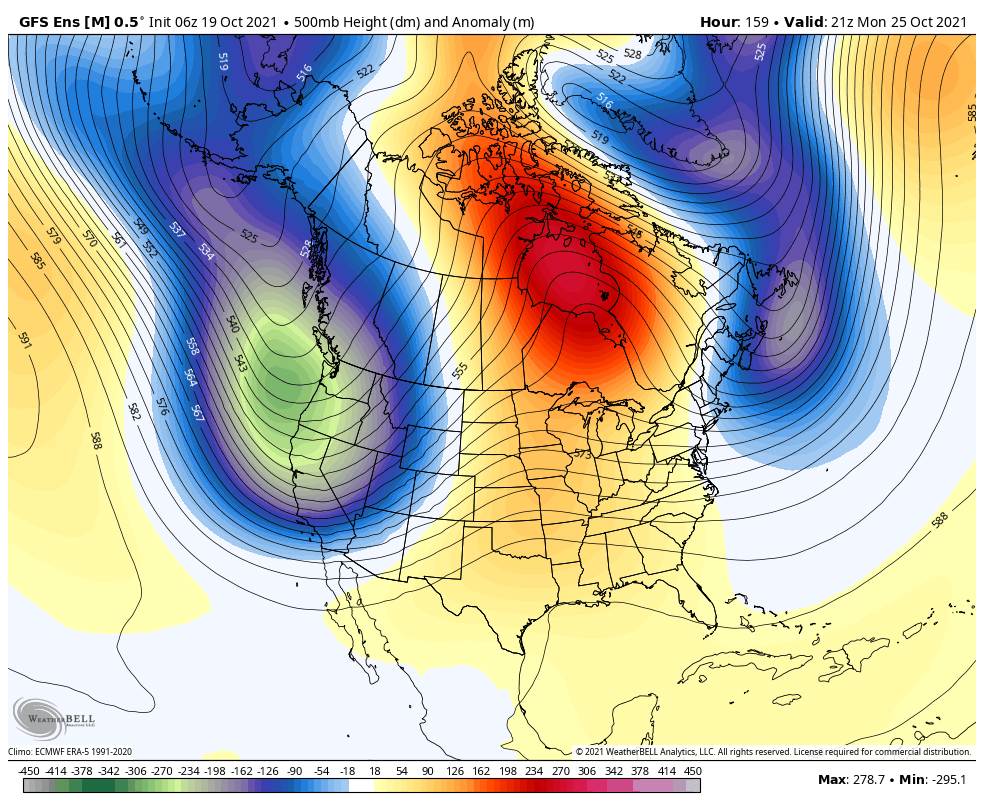 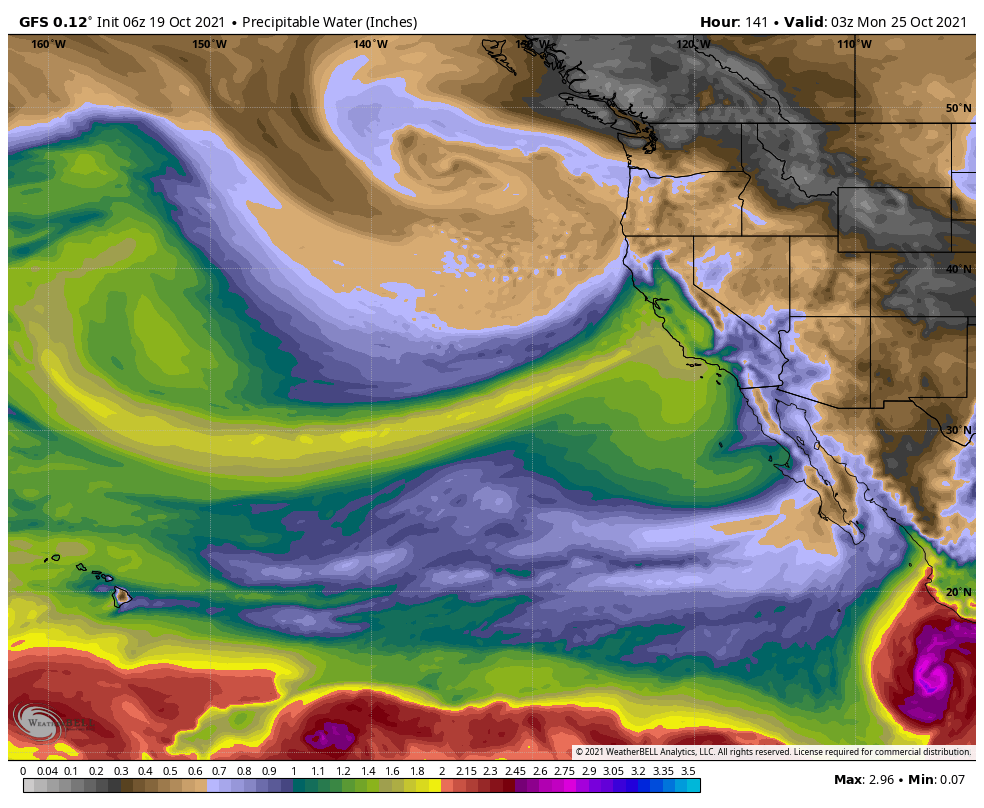 ...and an area of low pressure with a cold front moving through by Monday. 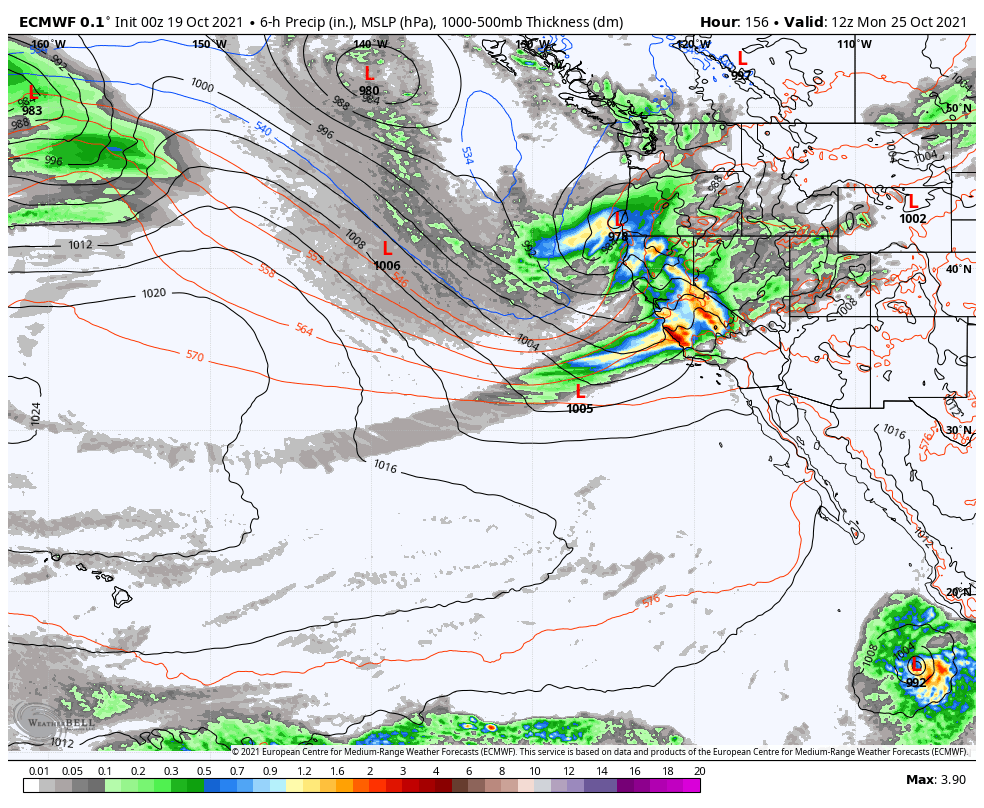 All the ingredients are there so we just need to iron out the details over the next few days as we get closer. Right now it looks like we could see a short break in the precipitation later Friday night into Saturday morning. Winds start to pick up again Saturday with gusts from the southwest up to 90+ mph over the ridges again possibly by afternoon.

Moisture could begin streaming into the Sierra again by later Satuday afternoon into Saturday night. Some forecast models like the GFS are drier with only scattered light showers. Others like the European model below show steadier precipitation possible. 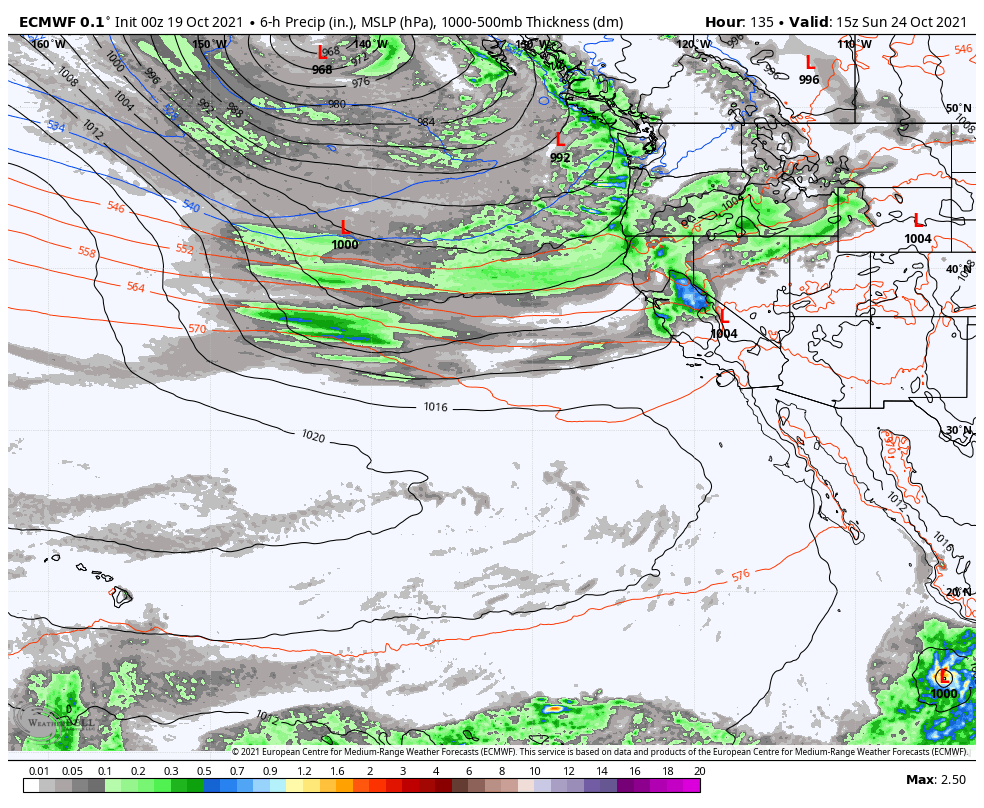 Snow levels could be between 6500-7500 ft. Saturday afternoon into Saturday night. So we could see some light snow accumulations on the upper mountains with rain showers for lake level.

Sunday the showers could continue with moisture continuing to stream into CA. Snow levels could rise up to 7000-8000 ft. Gusty winds should continue as well. Sunday night into Monday the big surge of moisture could push in as the AR takes aim at central CA and pushes inland. Then the cold front sweeps through Monday which could continue the heavy precipitation. 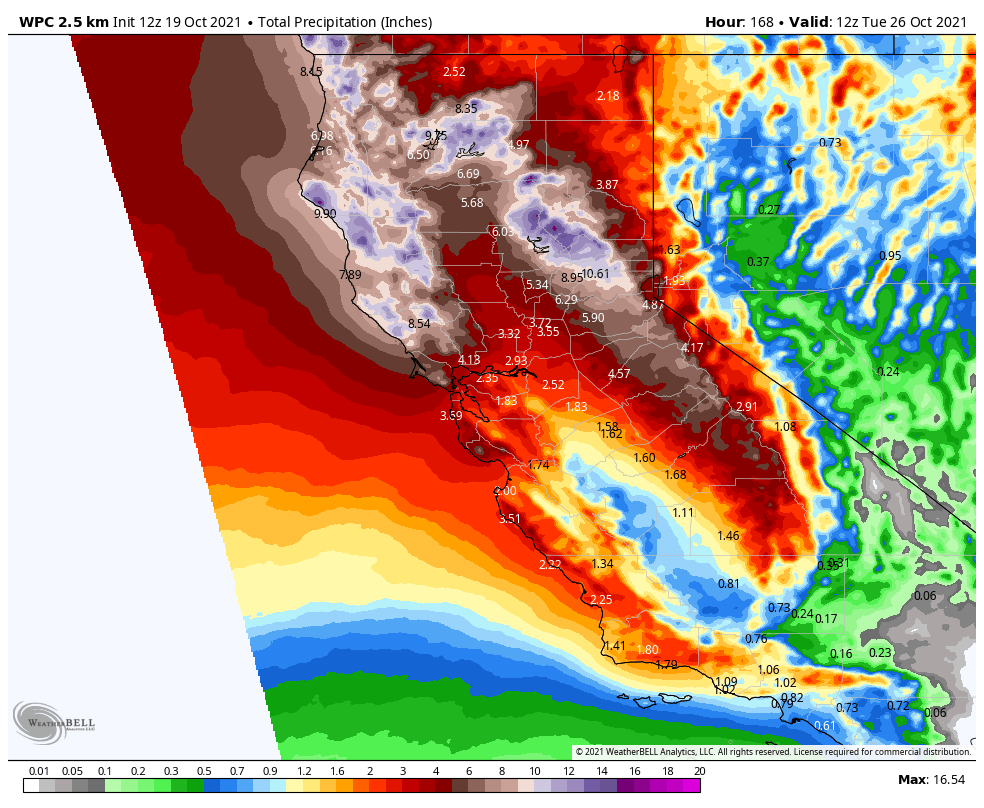 We are still 4-5 days out from the big storm, so a lot could still change. Not only the total precipitation amounts but also the snow levels. If the current forecasts hold, we could see feet of snow for the higher elevations, and possible significant snowfall at lake level on Monday.

I will continue to fine-tune the snow levels and snowfall amounts as we get closer, and in the meantime, you can check our proprietary in-house snow model forecasts on the individual mountain pages.

We could see a break for the middle of next week as high pressure builds in briefly over CA. 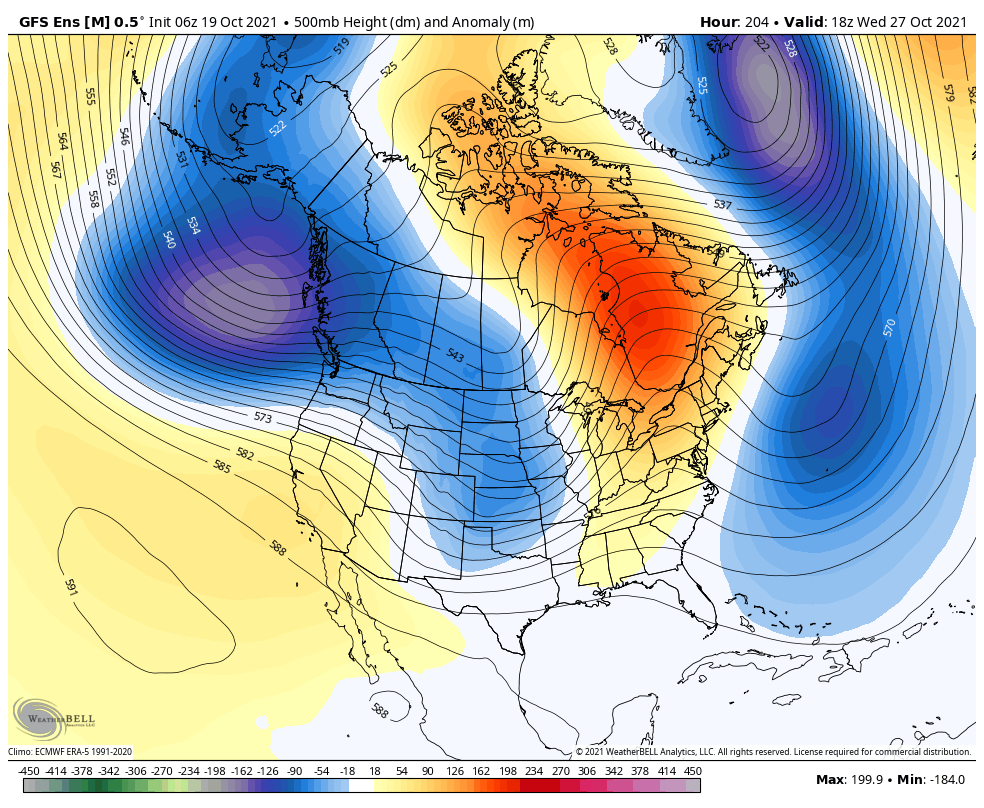 The long-range models continue to suggest that another trough digs into the West Coast by the end of next week. 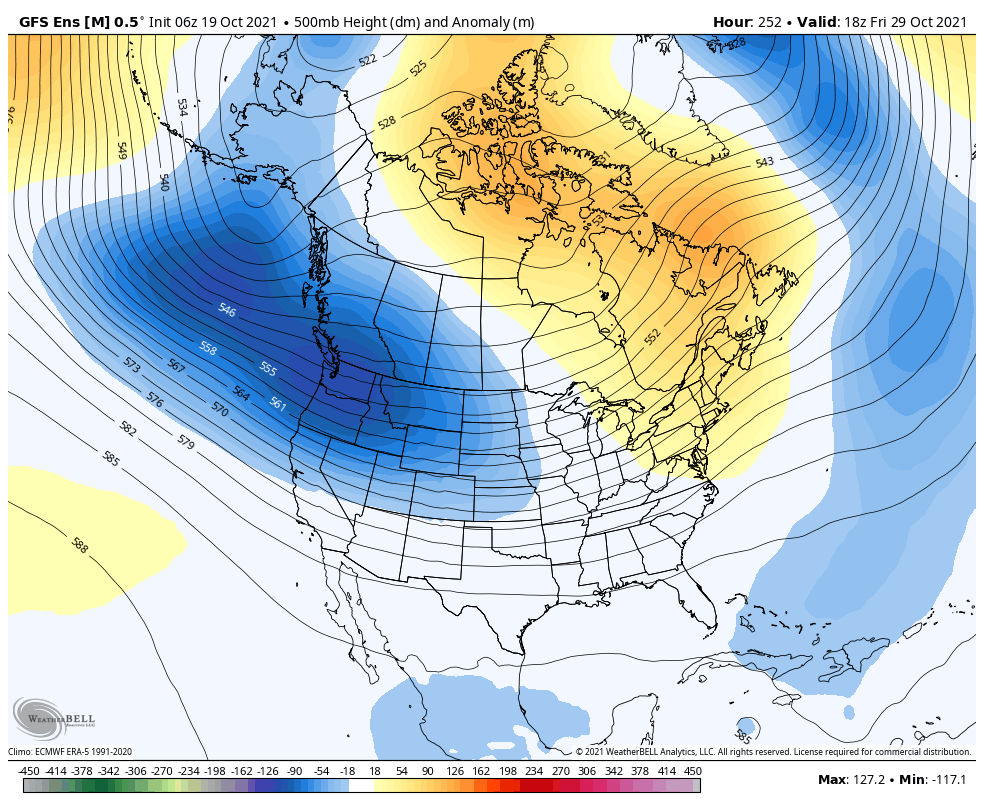 That could open the door to a final system moving through northern CA before the end of the month.

The long-range models continue to suggest a dry start to November with high pressure over the West Coast during the 1st week of November. Plenty of time for that to change.

P.S. I'll be on the road back home on a long drive all day Wednesday, so the next update will be Thursday.

P.S.S. We have been getting questions on when The Flakes Podcast will start up for this season. We plan to do a pre-season episode this week. But then we don't plan to do weekly shows again until the majority of the ski resorts open around Thanksgiving. The show is centered around forecasts and reports from ski resorts as well as interviews with ski industry people, so we can't get started until we have the ski resorts open. Thanks for being excited though!

Attention ALL weather nerds! We now have our sharing feature live on the OpenSnow & OpenSummit apps! You can now annoy your friends even more with our forecasts and weather maps! 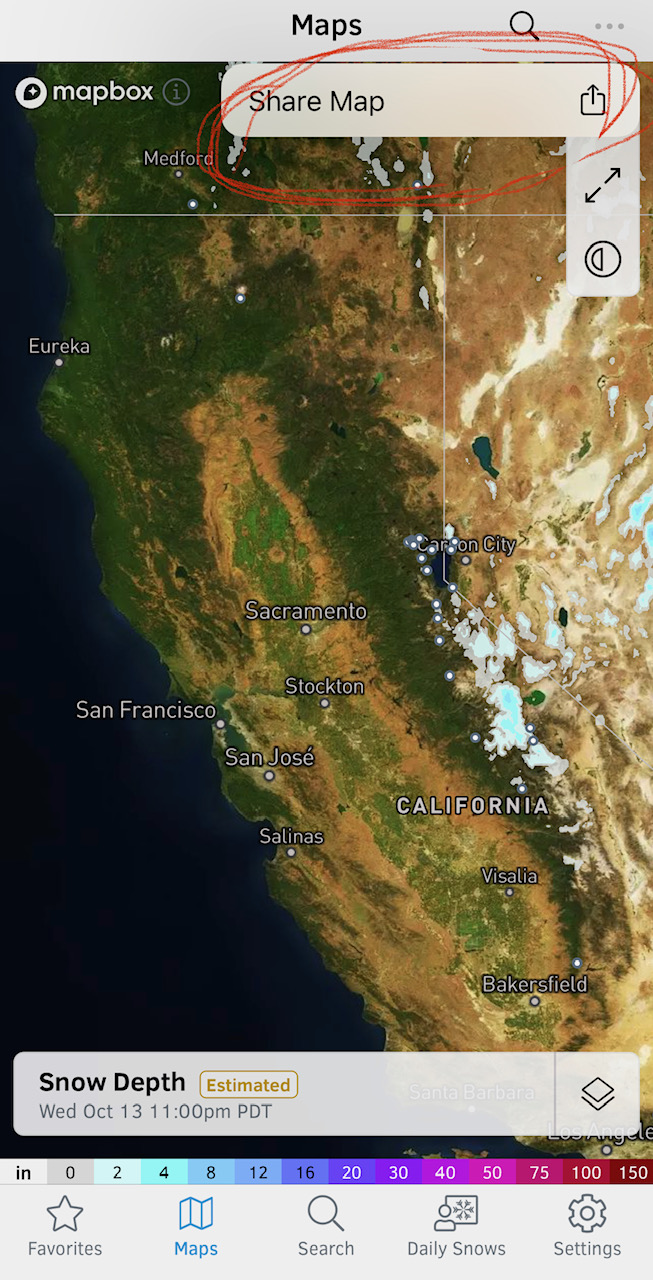 You can now easily share our high-resolution maps and location screens via the OpenSnow/Summit apps, along with daily snows, news articles, and cams in the OpenSnow app!

Bryan Allegretto
California Snow Forecaster
Bryan Allegretto has been writing insightful posts about snow storms for over the last 15 years and is known as Tahoe's go-to snow forecaster. BA grew up in south Jersey, surfing, snowboarding, and chasing down the storms creating the epic conditions for both.
Read More