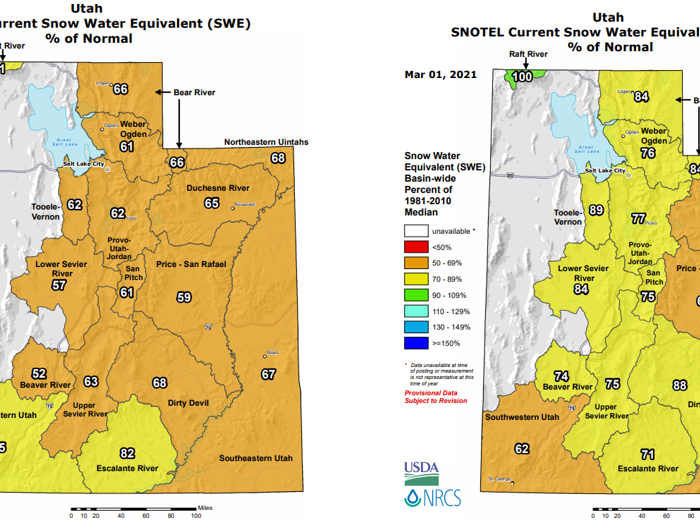 High pressure is in control with dry and warming conditions. A system will bring a chance of showers to primarily southern Utah midweek. Pattern could get more active again next week.

Welcome to nowhere, aka, Sun Valley, Idaho. A place where you’ll find more terrain and less people, ample lifts and minimal lines, more smiles and less attitudes, no reservations and more skiing. When you’re ready, grab your Epic Pass and see what it’s all about. Nowhere is Calling.

We are cold again this morning but should be warmer and sunny again by this afternoon. High pressure is in control now and we have a general break in the action.

Our next chance for precipitation will come late Wednesday into Thursday as a cutoff low ejects inland into Southern California and streams moisture northeast into Utah. Southern Utah has the highest likelihood of seeing appreciable precip from this feature, but latest trends have a chance for showers as far north as roughly SLC, so it's not out of the question that the Wasatch could see a few high elevation snow showers as well. Here is the latest GFS showing total precip from this feature: 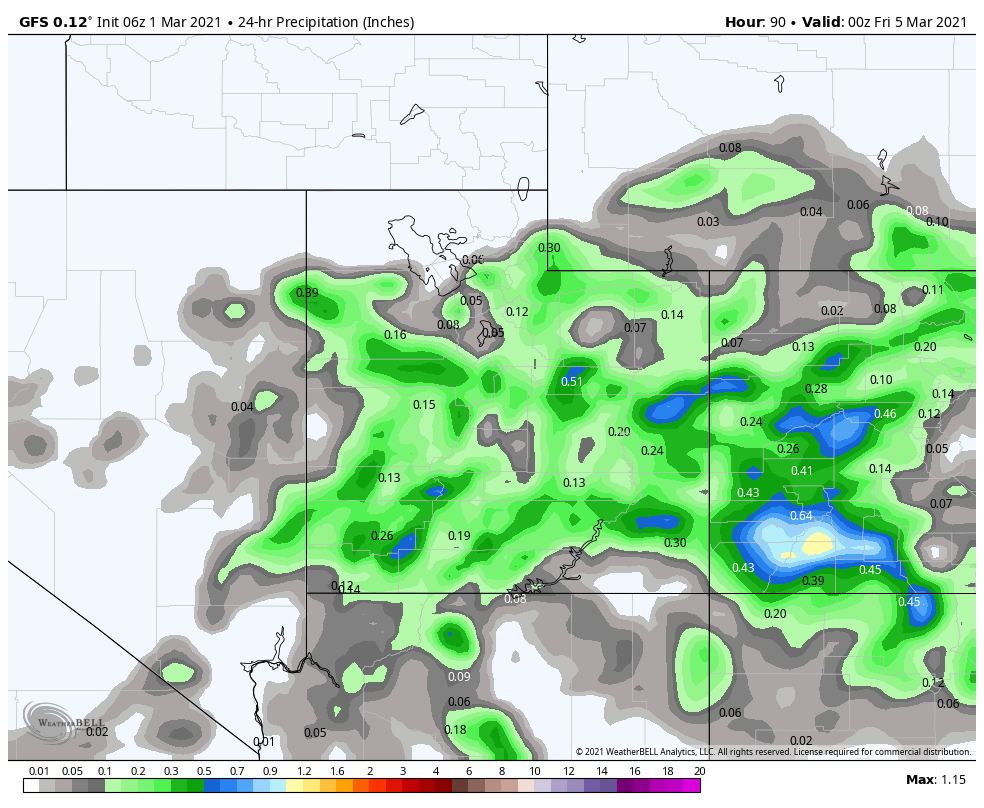 Mostly a southern and central Utah event, but could get some showers farther north. Snowfall accumulation should be confined to the high elevations and at this time look to be only a few inches.

We should then clear out again as we head into the first half of next weekend. Sorry, no Saturday powder day this week.

The pattern is looking to potentially get more active again next week. We are going to have a trough off the coast of California that will be ejecting pieces of energy eastward. These systems will weaken as the move inland. However, Utah could see some scraps. The first wave looks likely to be sometime around Sunday, March 7. Most likely, this will be very weak. However, it could be followed by a stronger wave around Tuesday of next week.

Gradually, that trough is progged to shift east and over the western states. Here is the EPS mean heights for March 15th: 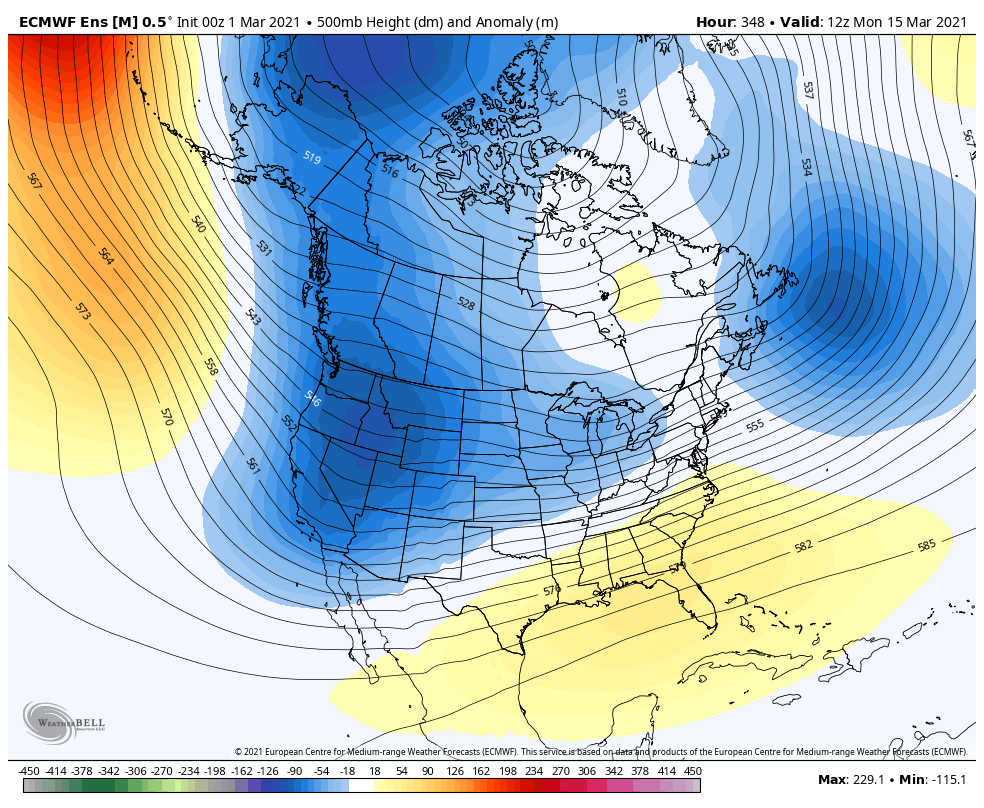 This would support the idea of a colder, stormier pattern by mid-month.

February was good to most of us, particularly in the central and northern parts of the state. We saw up to 162" of new snow. Here is a comparison of Feb 1 (left) and today, March 1 (right) snowpack numbers: 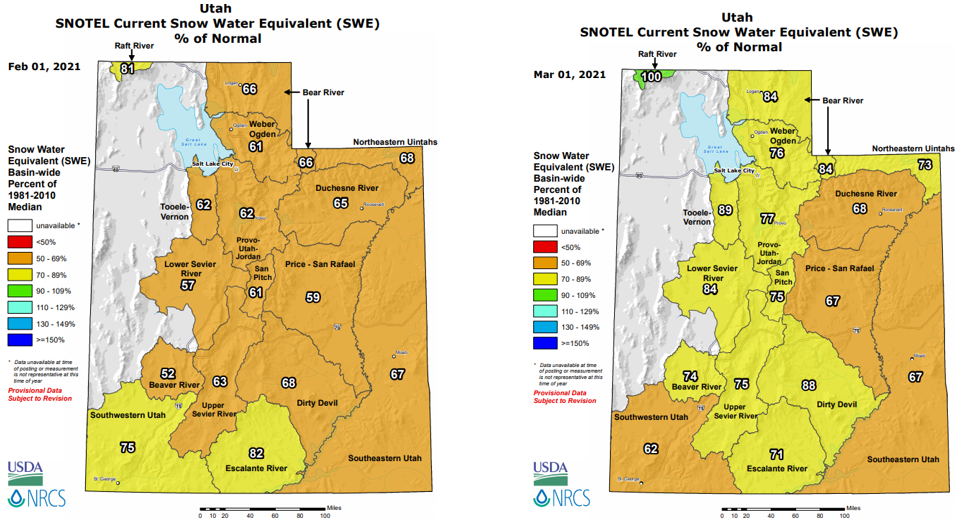 The only areas that saw a decrease were those of far southern Utah. Northern and Central Utah basins averaged an increase of approximately 15%. While we are still below average across the board, our numbers are at least somewhat respectable now. If we can have a good March and April, it's feasible that some of these basins could finish close to normal. That would be an impressive feat considering how poorly our season started. Remember, on February 1, we had already seen a drastic improvement from where we were middle of January. We have come a long way.

Looking at a few individual sites... Snowbird is doing quite well now at 87% of median: 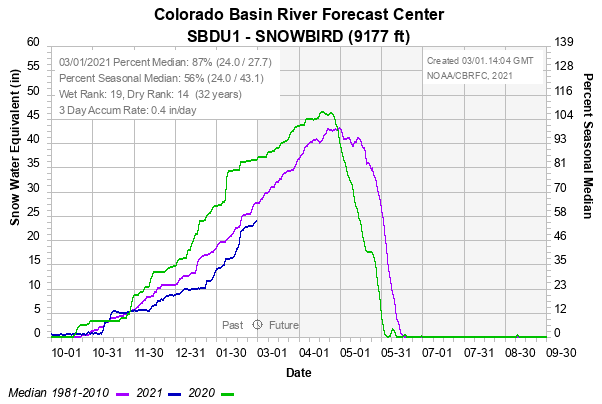 Brighton, which was having a very rough year with record low snowpack is now doing much better at 72% of median: 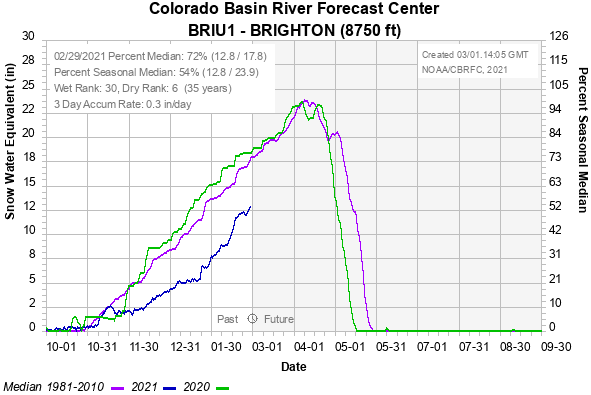 Across the crest of the Wasatch, Park City has seen some improvement, but maybe not quite as much as the Cottonwoods. Thaynes Canyon snotel sitting nicely at 69%. 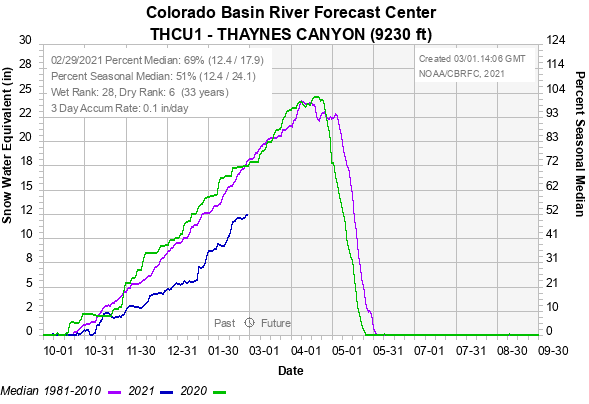 Perhaps the most impressive improvement has been in the mountains around Ogden Valley. Snowbasin has had a remarkable past 6 weeks. Ben Lomond Peak snotel has seen a massive spike and we are now very close to last year's snowpack numbers, but still chasing median at 76%: 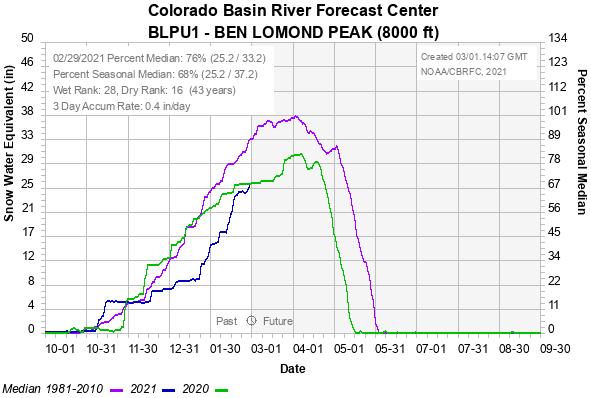 While I don't expect us to get back to normal, it's not out of the realm of possibility. We will likely see another dip over the next 7-10 days as we have a spring-like break in the action. Then, we could see us make up further ground middle of this month if the pattern gets more active as currently indicated.

Evan Thayer
Utah Snow Forecaster
To Evan, 'The Greatest Snow on Earth' is more than just a motto - it’s a way of life. In 2010, he started Wasatch Snow Forecast as a way to share the best powder days with his fellow snow-lovers. Evan brings the same quality forecasts and weather discussions to OpenSnow and hopes you enjoy skiing/riding Utah as much as he does.
Read More